The 2nd Vice-President of the Nigerian Bar Association, NBA, Mr. Monday Ubani has been bestowed with the 2016/2017 Nelson Mandela African Youth Leadership Award as Africa’s most outstanding person on humanitarian services.

By the award, Ubani has been officially inducted into the African Youth Parliament, AYP Hall of Fame.

Speaking during the conferment of the award in Lagos, Leader of AYP, Diplomat Eric Jomo said that the choice of Ubani for this year’s award was informed by his immense contribution to youth empowerment and transformation.

” We as youth and law abiding citizens of Africa unequivocally identify with your outstanding principles, styles, sagacity and leadership acumen which have culminated in the tranquillity of community development, value re-orientation, philanthropy and charity to the less privileged.

“AYP is pleased to name you as a role model. This is informed by your uncommon leadership qualities, courage, confidence, versatility and impartiality. We believe that this honour will inspire others to emulate your exemplary live saving approach to issues of national importance,” he said. 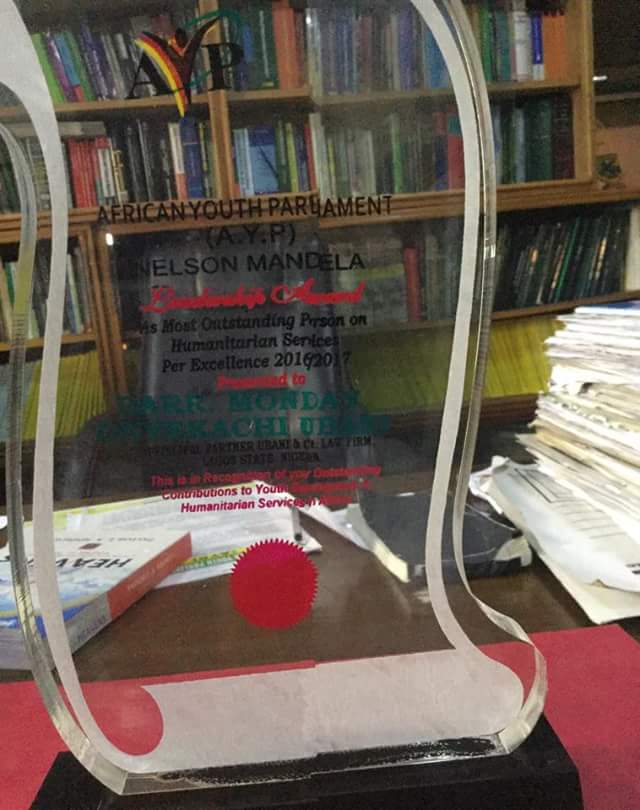 Jomo noted that AYP is a dynamic leadership body of all democratic youth unions across 54 African countries with the objective to promote positive societal and economic policies, identify with those who have promoted the development of youth and encourage peaceful coexistence.

In a short speech after receiving the award, Ubani said he was happy to be identified with an award that is associated with Nelson Mandela; a man greatly love and respected by many even in death.

Ubani noted that like every other award he has received in the past, the AYP award has further encouraged him to continue to champion the cause of the youth and less privileged.

” I am particularly happy with this award because it is associated with Nelson Mandela; a man who fought for his people and paid the ultimate price. I thank AYP for finding me worthy of this prestigious award. The struggle for the emancipation of our people from poverty and hopelessness continues and I must say this award has spurred me for do more even in the face of daunting challenges,” he said

Ubani however noted that it is regrettable that youth across Africa are not given their right of place in governance as old and corrupt leaders continue enrich themselves with the peoples common wealth.

Buhari Far Better Than Jonathan In Terms Of Governance – Ubani