In recognition of his unwavering commitment to justice and rule of law, the immediate past 2nd Vice President of the Nigerian Bar Association, NBA, Monday Ubani has in the last two months, received about four awards and recognitions from different notable organisations.

While two youth based organizations, Yoruba Youth Assembly and National Youth Assembly honored him with an exemplary leadership award, a reputable news magazine publication, Prestige Magazine recognized him as the most outstanding legal personality of the year. The Ikwuano Development Union, Lagos branch also honored him for his selfless contributions to the development of Ikwuano community.

In the award presented by National Youth Assembly, the group noted that Ubani is among the very few Nigerians who have continued to inspire the youths with his humanitarian efforts and fight for justice.

While presenting the award, NYA executives in Lagos stated that the selfless effort of Ubani in championing for democratic ideals and human right had not gone unnoticed by the youths.

They stated that the decision to reward him as their most outstanding man of the year was based on what they described as his doggedness and commitment to always stand for what is right at all times.

Presenting the award, the group said: “ After carefully following your activities over the years, your sterling performance, your giant strides in the judicial sector, your empowerment and service to humanity, we the Nigerian Youth Assembly present you with this award as a worthy role model of Nigerian youths.” 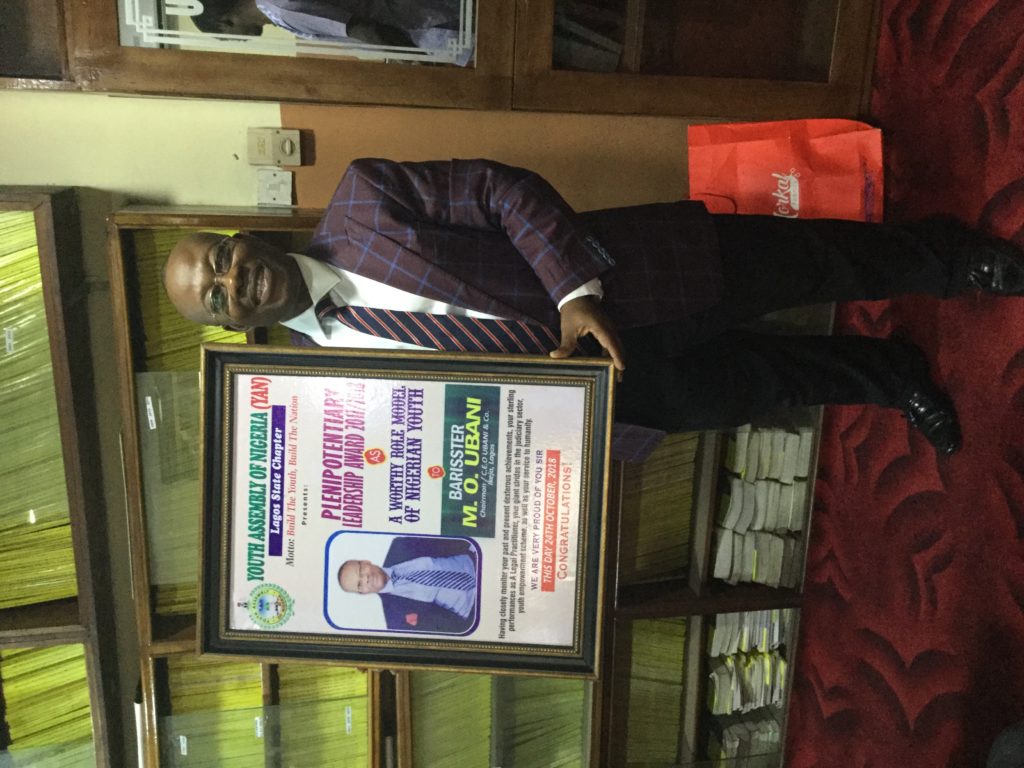 While expressing his appreciation for the recognition, Ubani encouraged the youths to always speak up on national and not allow politician to manipulate them.

He said the future of the country lies with the youths who must do every possible to take the leadership of the country from corrupt politicians who have practically ruined the nation.

In August, the Yoruba Youth Assembly named Ubani as the most outstanding man of the year.

The group also inducted him into their prestigious hall of fame.

Following the trend of recognition, Prestige Magazine which is reputed for its incisive reports, recognized Ubani as legal personality of the year.

The Magazine since its inception has honored several Nigerians who have distinguished themselves in their various fields of endeavor.

The saying that a prophet is not recognized in his home town proved wrong in the case of Ubani and his hometown. In recognition of his selfless contributions to the development of their community, the Ikwuano Development Union, Lagos branch rolled out drums to honor him in a well attended event in Lagos.

For the lack of appropriate words to describe the immense contributions and sacrifice that Ubani has made to the development of Ikwuano community, the people of the community simply named him ‘ The Legal Voice of Ikwuano.”

Monday Ubani - Sep 6, 2018
0
By Henry Okonkwo Ahead of the 2019 election, the nation is once again embroiled in high-wired political maneuvering and gerrymandering that have beclouded the political...