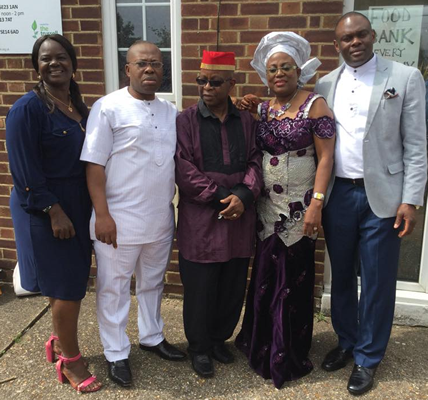 Former Chairman of Nigerian Bar Association, NBA, Ikeja Branch, Mr Ubani Monday Onyekachi, has called on the Attorney-General of the Federation, AGF; Inspection-General of Police, IG and the Chief Judge of Abia State to put measures in place for the swearing-in of Dr. Uchechukwu Samson Ogah as Governor of Abia State.

In a Press Statement on Sunday, Ubani who is also the Legal Adviser to Uche Ogah said that in the light of last week’s development wherein Justice Okon Abang of the Federal High Court, Abuja refused to reverse his earlier order sacking Dr. Okezie Ikpeazu, Ogah remains the Governor of Abia State.

Stating the difference between the Abuja and Owerri Federal High Court decisions on 8 July, 2016, Ubani said: “Two things or decisions took place on 8 July, 2016 at both Federal High Courts in Owerri and Abuja that require some clarifications to all and sundry. Sir F.N Nwosu, a fellow contestant to the primary election of PDP in December 2014 also took Dr Okezie Ikpeazu to court on the same tax issue, but in his own case he made allegation of forgery against Dr Ikpeazu contrary to S182(j) of the 1999 Constitution as Amended.
Ogah

“His contention was that since Dr Ikpeazu was not qualified to run for the primary election because of the alleged forgery of his tax papers, he who came joint fourth(with 5 votes) should be declared the governor of the state as he and only Dr Ikpeazu signed the result sheet. On why he should be preferred against Dr Ogah who came second in the primaries, Nwosu argued strenuously that Dr Ogah and other contestants did not sign the result sheet apart from Dr Ikpeazu who apparently is now no longer qualified to have run for the primaries.

“As I predicted in most of my write-ups before now, he had his case thrown out for lacking merit and substance. Forgery is a criminal offense which requires proof beyond reasonable doubt and since he was unable to prove forgery, he had his matter dismissed. However the judge acknowledged that the tax papers of Dr Ikpeazu contained some discrepancies.

“In the case of Dr Ogah at Federal High Court, Abuja he did not allege forgery or tax evasion. He commenced his action under originating summons after obtaining the documents and affidavits of Dr Ikpeazu in accordance with S31(4) of the Electoral Act 2010 and his allegation is that the gubernatorial candidate of PDP, Dr Ikpeazu gave false information(not falsification, not forgery) of his tax payments. This is in accordance with Section 31(5-6) of the Electoral Act, 2010 as Amended. Section 87(10) of the Electoral Act, 2010 as Amended gives a co- contestant right to approach the court, either federal high court or state high court for a remedy where he or she finds out that the information disclosed by his or her opponent contains false information.
Ikpeazu

“Now Section 31(6) of the Electoral Act provides that where the court is satisfied from the evidence presented that the candidate has given false information as provided in the Act, that candidate is liable to be disqualified.

Ubani further stated that Justice Okon Abang of the Federal High Court Abuja examined the affidavit of Dr Ogah and the counter affidavits of Dr Ikpeazu and found out that indeed the tax papers of Dr Ikpeazu contained several lies on its face.

Ubani said this was the basis for the Abuja Federal High Court order sacking Ikpeazu as Governor of Abia State.

On the contentious issue as to whether tax is a constitutional matter which can warrant the removal of a sitting governor, Ubani clarified that section S177(c) of the 1999 constitution as amended provides that a candidate must belong to a party and must be sponsored by that party.

” For a party to sponsor a candidate for the gubernatorial election, he or she must have fulfilled all the conditions stipulated in their guidelines including tax payment stipulated in article 14(a) which provides that if the candidate fails to so do, he or she shall be disqualified. Therefore tax is constitutional requirement since the party’s guidelines made provision for it,” he said.

“Indeed can a court properly called restrain a public officer from carrying out his or her duty donated to him or her by law? I don’t know of any such precedent. The Chief judge of Abia therefore cannot be validly restrained from swearing in Dr Uche Ogah. If she fails, refuses and or neglects to carry out her constitutional duty, it will be a ground for disciplinary action against her by the National Judicial Commission in the near future.

” The Court of Appeal will also ultimately pronounce on this absurdity in the near future. Our judiciary which we have absolute confidence on, knows how to resolve knotty issues like this,” he said.

“The matter as it it stands today is that Dr Uche Ogah is the governor of Abia State, legally speaking. But he must be sworn in and take his oath of office, declare assets before he can start to act in that capacity as a governor.

“Once again I call on the Attorney General of the country, the Chief Justice of Nigeria and the Inspector General of Police to ensure the orderly and immediate swearing in of Dr Uchechukwu Sampson Ogah OON as the next Governor of Abia State as nature abhors a vacuum which is actually the case now in Abia State,” he concluded.